There is a scar across Arizona.  It runs North West to South East, north of Pheonix.  Surprisingly, the altitude reaches almost 8000.  Not the Valley of the Sun most people think of. The mountains break for a wide green valley.  This green world colored by Ponderosa pines over 80 feet tall.  From up here, they are like berber carpet. 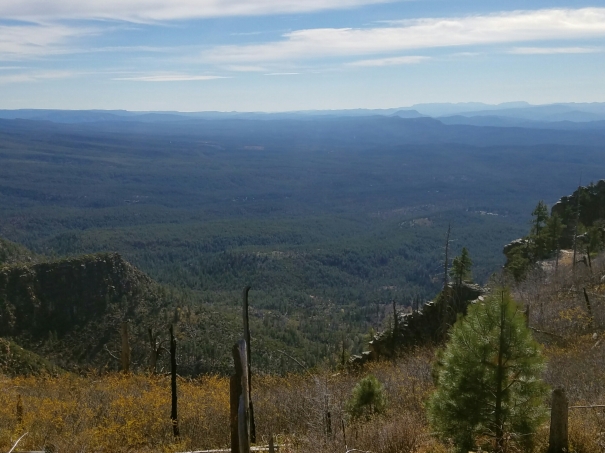 The Rim Road, or Forest Service Road 300, follows the edge fairly closely.  it’s single lane gravel.  Probably best when dry.  No guardrails if you are into those kind of things.  The views are measured in tens of miles here.  I started just north of AZ 87 and west AZ 260 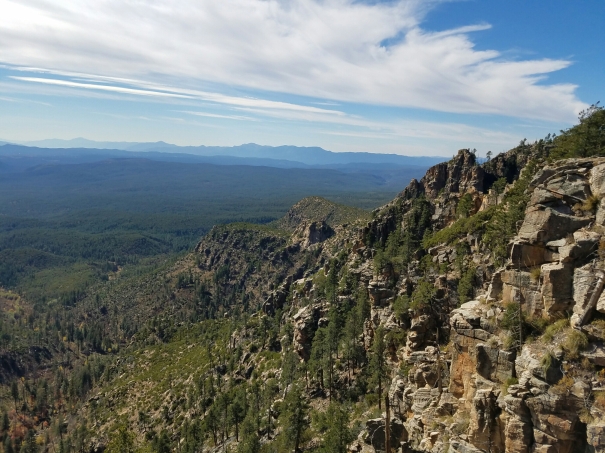 Below on upper left you can see the road. The logs and dead trees are from a forest fires in 1990.  The small pines are about ten feet tall!

There are Peregrine Falcons and Eagles here.  I had a Peregrine come up from below and fly about 30 feet away.  Close enough to see its colors.  The Eagles were much further away.   There are Elk, Bears, and Cougars through here.   But you’ll probably never see anything but Elk.

A first blush these aren’t the ruins you go to visit.   Actually this is what find look like before they are cleaned up and repaired and signed.  The rock outlines and fences spread out across 4 acres here.   There are changes in styles of rooms and positioning with other rooms.  Over four hundred years people lived here.   They used rocks as foundations and covered them with branches or skins and wooden frames. 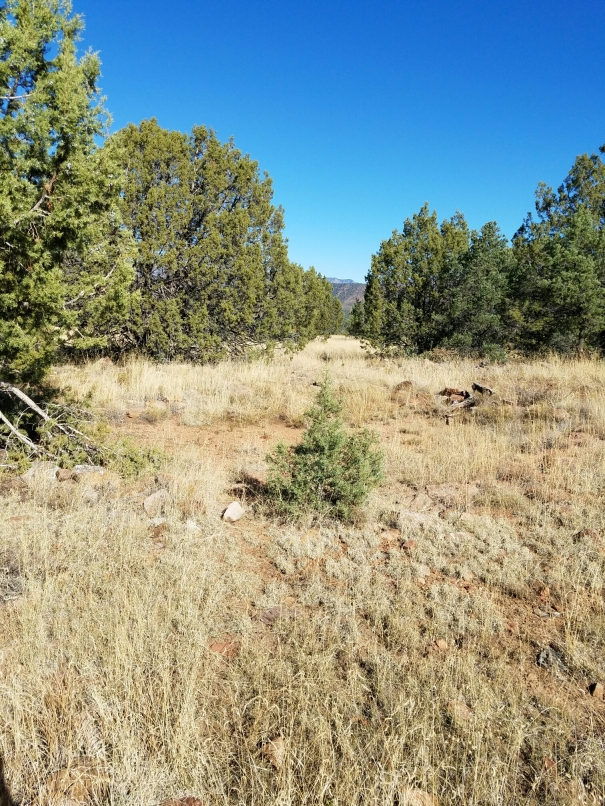 In the picture above, the sapling pine sits where a door was.  There is an oval ring where a house stood about 1150 AD toward the end of their stay here.

It’s on the Houston Mesa Rd off of North Arizona 87.  There’s a weird feeling to the place.  You could spend more time here than you realize. 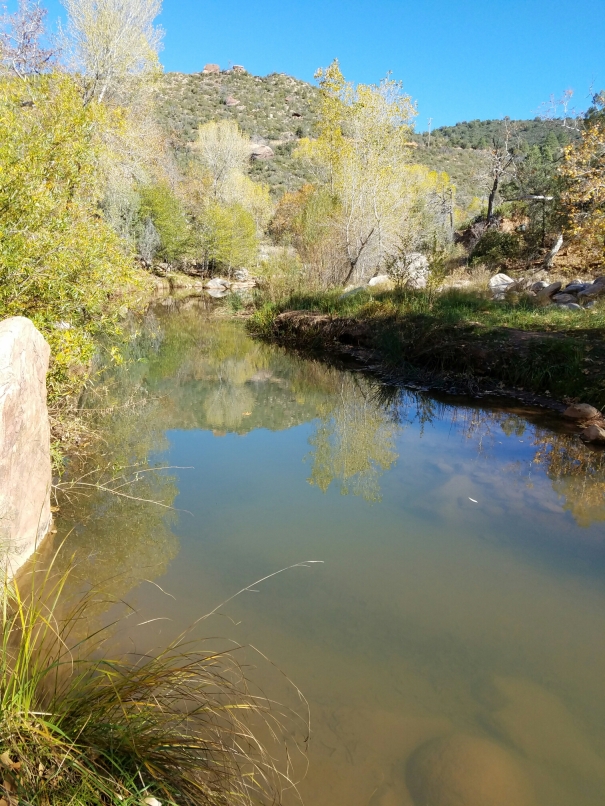 If you are in the Payson area and have some time to kill.   Here are little gem.  Its about 20 minutes from Home Depot off a road called Houston Mesa.  The road has a gorgeous view of the Mogollan Rim.  There’s even a sign for Water Wheel parking after your cross a large concrete bridge. 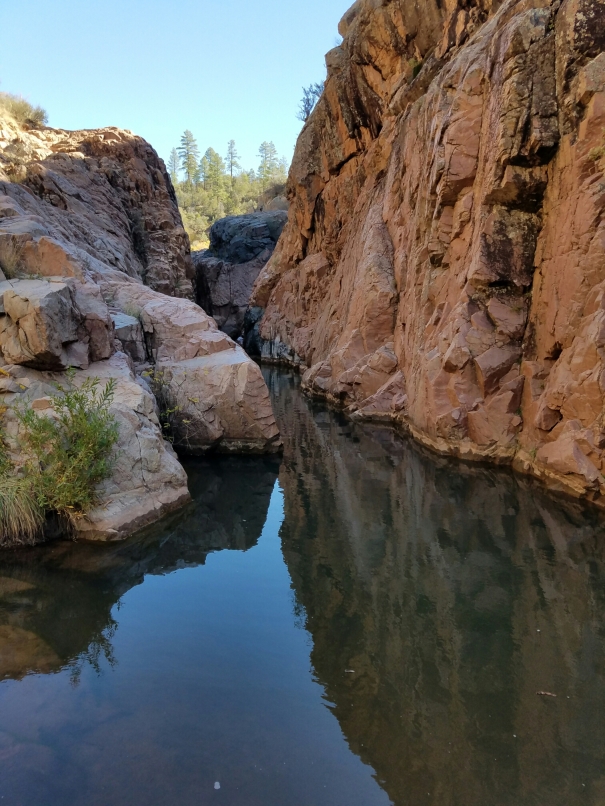 The hike was about 1 1/4miles that I did.   You stay along a tributary of the Verde River.  Our experience of the first features is a Box Canyon which terminates with a sixty foot ribbon waterfall.   The sides of the canyon are polished granite.  The same water below has ride high up these walls and across to smooth the granite.

As you get closer to the end you’ll notice a second ribbon waterfall on the right.  Those liking to rock hop you can get to the falls fairly easily.

At the top of the Box Canyon,we have a much more open landscape.  Plenty of water flows from multiple sides.  Willow trees mix in with Sycamore and pines.  There are several cascades that wind around close to the waters edge.  They call out to you.   I took advantage of dry conditions to explore at least 15 different cascades and third waterfall about 20 minutes from the end of the box canyon.  The hike is probably closer to moderate with notrouble a lot of shade.  Bring water or drink well before and after.

There are critters calling this home.  The tarantula here is about three inches long and blends in really well.  Several small lizards run rock to rock.  I even saw a butterfly in November.  There were few  birds. 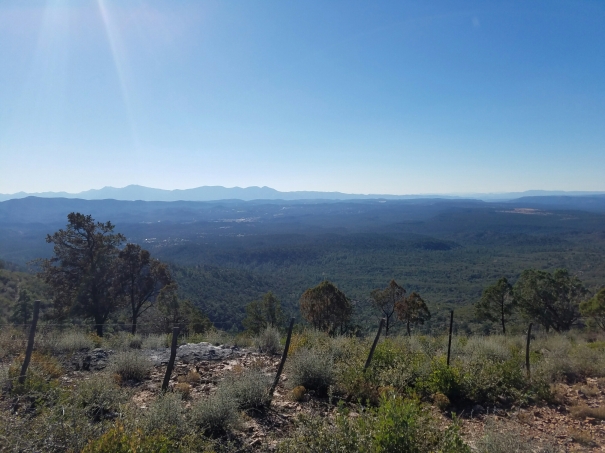 Today, I stepped out into the Arizona Sun.  My restless shoes have been dirt free for a week.  New life in a new place.  Simply put, this  will not do.

I go to the License Bureau to become a real Arizonan (sand cutter).  I hear of a place involving diamonds!  Ok called Diamond Point.  I break out the Google Apps on the phone…. it’s 15 miles from me!  Restless shoes are about  to find dirt.

Anyone in the area?  Well, East of Payson on AZ 260 by 15 miles, you’ll find a little road to Tonto Village.  The lovely people pave the first 2 miles for you too!  The rest is called dirt but really sand and gravel.  You can do it in a car.  Lower riders maybe not after bad weather.

There are several campsite spread out along the six mile drive.  The views are strictly forest going up.  There exist trails from people like me looking for quartz crystals.  The forest service maintains the area and may have trails on theirs maps.  Ponderosa pines cover most of the area which makes it a nice hiking place. But there’s thing to find here.

That is a quartz crystal!  One side has a point and the other part of one.  The actual size is about that of a large fingernail.  There are two ways to find them.  Using a shovel or hand trowel ( perfectly  legal here !) Or look on the ground near water run offs, stream beds, drainage pipes along the road.  I found this in leaf liter near a dry stream sitting out in the open.

Oh yeah!  There’s one hell of a view from the top.  The elevation is about 1000 feet above the Valley below.  You can see several rows of mountains.   They were doing a prescribed burn yesterday and today and some logging too.  Don’t go near either operation.

This is New Mexico along I40.  The landscape East of Gallup is spectacular! 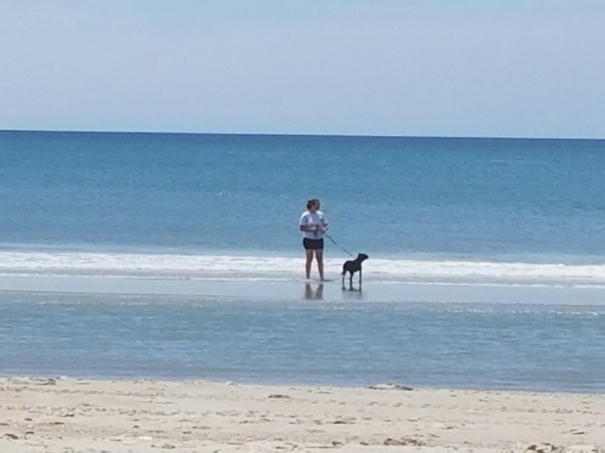 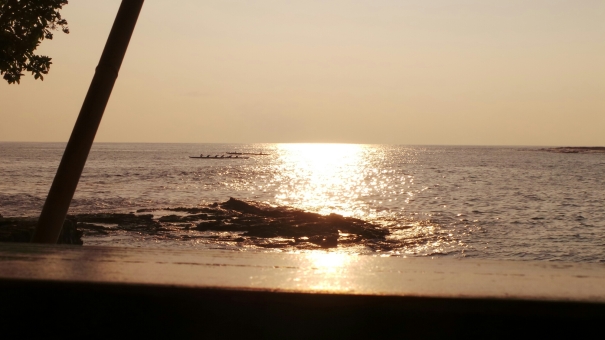 Above the calm peaceful views of relaxing water.  Below, West Virginia record flooding shows the raw power of water

Near downtown Las Vegas, two blocks north of Freemont Street is a fun trip back to the Mob days.

The beginning “you are indeed suspicion “.  The immigration of several poor groups to slums in New York City is where we start. Gangs of Irish, Jews, and yes Italian. 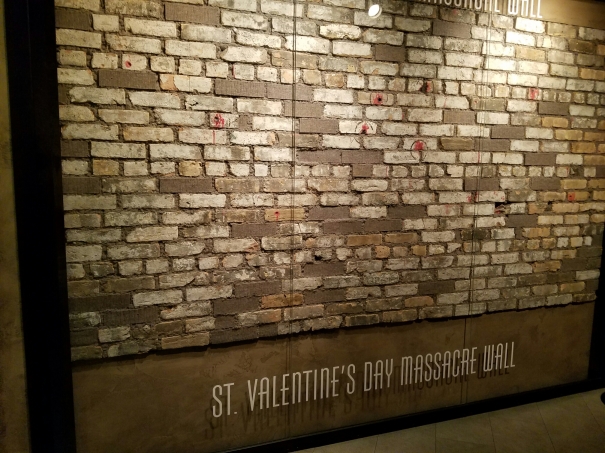 The actual wall from Al Capone and the Valentines Day Massacre.  This was a hostile takeover before corporate mergers needed government approval.

Imagine inventing the bulletproof vest.  Now your wife and the police who you are selling it get to shot you to make sure it works.  Brave man.

Behind this Red Door was the sex trade.  If it was illegal or illicit, the Mob skimmed cash from it.

The actual State of Nevada electric chair have a seat! You can pull the switch with your left hand too!

Say you are out of money.   It is Las Vegas.  For the crafty person with lead, about to cast a model, could make slugs.  Fake coins to fool the slot machine.

The admitted amount of money that Mob operated casinos skimmed off the top.  Not the reported take of the day.  That was taxed, so it was wrapped in bundles and placed in suitcases, or sewn into clothes.  Then flown to other cities.

You can do Scenario training like a real cop.  You have to decide to shot or not shot when approaching a possible crime or felon.  Actual cop in photo doing the training.  If my wife knew I took the picture the post wouldn’t be here.

The El Chappo display showing the Mexican drug lords escape route from prison and his history. 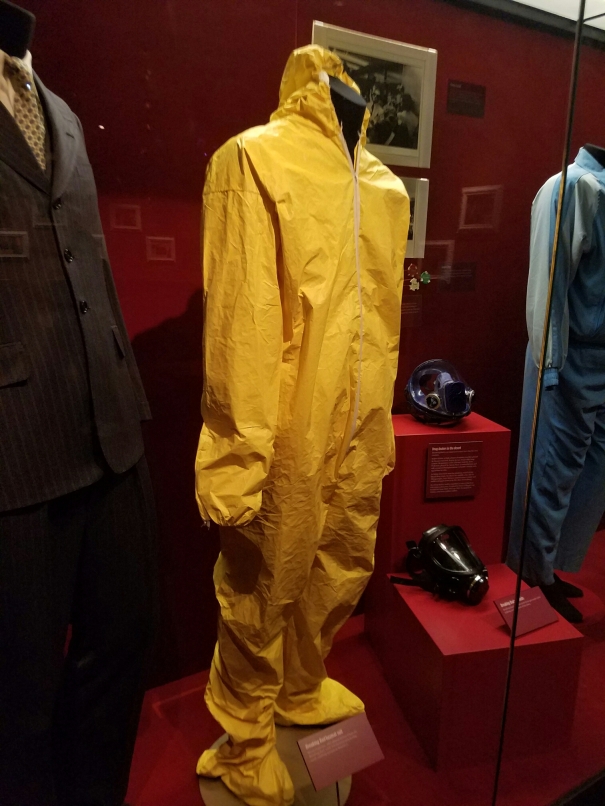 The biohazard suit from the last season  of Breaking Bad.  They have other displays too.  Hollywood crosses over with the Mob.

The desert is calling.   It’s has a ringtone like a slot machine paying out! Really! 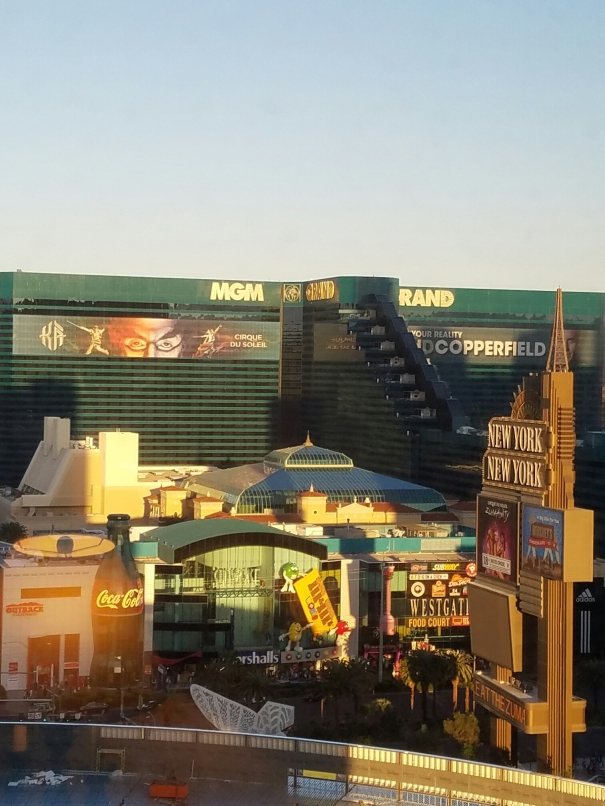 I posted a couple pictures while on Bell Rock.  The way there is interesting.  It involves parking.   Well, after 9AM go at lunch time.  There are two parking sites.   The park service days use Courthouse Vista because the rock climbs are easier.   Bell Rock Vista parking is larger.   That’s the way I chose after finding no parking anywhere else.

The parking lot is about 3/4 mile from Bell Rock.  The views are awesome.   There are plenty of spring flowers, critters, and people.  In 68 degree weather with partly cloudy skies, it very comfortable.  During summer, go early
and bring hat and plenty of water.

The path to and around the Bell are fairly easy.   The hike onto the bell isn’t.  The smooth surface means good traction on shoes.  The area is amazing.  The vortex effect is very calming.  The sense of peace fills this place

Above and below are from halfway up the bell rock.

This is a must do if you come to Sedona.   You can go to the top if your legs can take a strong without.   You can go partial up from the North side easily

Distant Voices from Outside World